This vehicle is our current our priority group restoration project. See updates on its restoration here: The Restoration of 176 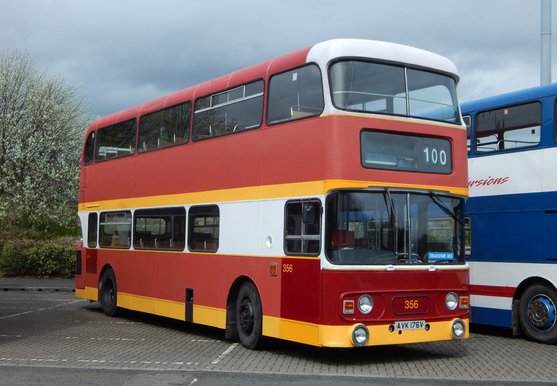 With deregulation in 1986, the TWPTE name transferred to a new legal entity of Busways Travel Services, resulting in a number of Busways identities being formed. Being at Byker depot, 176 lost its Tyne & Wear PTE livery in favour of the City Busways name. It received the classic cadmium yellow and maroon North Tyneside variation of the Busways livery while also being renumbered to 356.

Withdrawal before the millennium resulted in 356 being sold onto Weardale Motor Services of Bishop Auckland, where it was mainly used on school work. Weardale operated the decker in a white and red livery, which was how it was when it entered preservation in 2008. Atlantean 268 (SCN268S), which is also preserved in the North East, also came from Weardale.

Under its previous ownership in preservation, 356 was partway though being transformed into the notable “Busways Faresaver” advertisement livery, which was based around the Newcastle Busways colours and advertised the company’s travel cards at the time. The livery was originally wore by sister Atlantean AVK153V and Olympian C628LFT which have since been scrapped.

In October 2019, the vehicle was sold and passed to THV group ownership, with plans to restore it back into City Busways livery when it was numbered 176 in the Byker depot fleet.