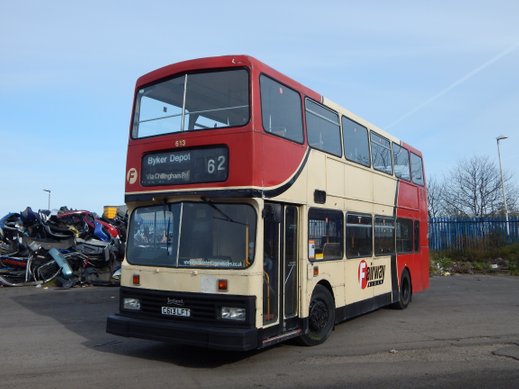 613 (C613LFT) was one of sixty-five Leyland Olympians with Alexander bodies delivered new to Tyne & Wear PTE in early 1986. It was ordered and delivered during the deregulation of the bus companies, and arrived in the PTE livery.

With deregulation a year previously, the TWPTE name transferred to a new legal entity of Busways Travel Services, resulting in a number of Busways identities being formed. Being at Byker depot, 613 lost its Tyne & Wear PTE logos in favour of the City Busways name. By 1993, the City Busways name was dropped in favour of 'Newcastle Busways' which was carried by neighbouring depot Slatyford, and 613 adopted this yellow and maroon livery. In 1994, employee owned Busways was sold to the Stagecoach Group. In 1995, the Olympian was decorated into a rather eye-catching red, white and blue all-over advert for Auto Trader, before adopting the Groups' corporate white with orange, red and blue stripes livery.

Stagecoach adopted a new national fleet numbering system shortly after the Millennium which resulted in 613 being renumbered to 14613, and soon after this, it along with a handful of other C-LFTs were sold to Stagecoach's Manchester division in 2003. The Olympians were in use with Manchester up until 2005, and some were painted into Magic Bus livery; Stagecoach's low cost network which ran in competition with other companies. 14613 remained in Stagecoach stripes and was based at Hyde Road. 14613 was transferred to Cleveland Transit in 2005, in which it operated with Kingston upon Hull City Transport. Transit was also bought by Stagecoach in 1994, in which Hull was still part of the Transit operations - Hull is now part of Stagecoach East Midlands. The decker operated with Hull up to 2006 and gained Stagecoach's new ‘swoop’ livery during its time in the Midlands.

In February 2016, Tyneside Heritage Vehicles bought 613 for preservation. With the exception of 609, which is heavily modernised as a farm storage vehicle, 613 appears to be the last Byker example.