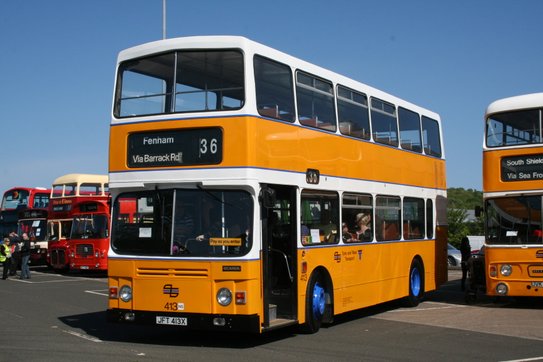 413 (JFT413X) was new to Tyne & Wear PTE and was one of two Alexander bodied BR112DH Scanias purchased for evaluation by the company in 1982, with the other bus being 414 (JTF414X). It operated out of Slatyford, and after the process of deregulation and privatisation of the bus companies in 1986, 413's ownership passed to Busways Travel Services and remained in North Tyneside, where it was repainted into the yellow and maroon Newcastle Busways livery.

Soon after Busways was sold to Stagecoach, 413 and its sister were bought by R. Bullock of Cheadle who operated them on local services in and around Stockport. Interestingly, Bullocks fitted the pair with large square vented radiator grilles on the front which was purely a cosmetic exercise given the actual radiator was mounted on the side of the bus. 413 was re-registered as JIL8211 during its time with Bullocks and when sold on to Black Prince Buses in 1998, the plate was retained by the company, so 413 ended up with a more age-appropriate, but Manchester registration of JIL8211. Black Prince of Morely West Yorkshire operated 413 and 414 in Leeds, with the Bullocks red livery adapted into the Yorkshire style.

413 was purchased for preservation on its withdrawal from service in August 2000, sadly 414 was scrapped. 413 returned to the north east in its Black Prince livery and attended a local Gateshead rally a year later. It then spent eight years off the road receiving an intense restoration plan which saw it restored into its factory-new Tyne & Wear PTE livery- with its original front panel. It is now part of the THV Group Owned fleet.