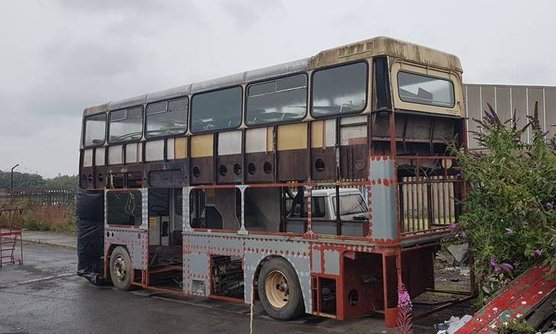 769 (OCU769R) was one of 140 Scania Metropolitans to be purchased by the Tyne & Wear PTE between 1975 and 1977. The Metropolitan was the first double decker model to be jointly built by Scania and MCW, with T&W PTE being the second largest customer behind London.

The Metropolitans were all allocated to Newcastle, serving Byker and Slatyford depots with the majority operating up to the time of deregulation of the bus services. All but one batch of the Metropolitans were new with central door-exits, and many of these were converted by the PTE to single-door use - the OTN-R and RCU-S batches were the only single-door examples from new. Notably, 769 was one of the Scanias selected for conversion to single-door only, and this was done in 1984. With deregulation to the newly formed Busways Travel Services company, Busways withdrew further aging Metopolitans, with the remaining duel-door examples heading out the door first. The Metropolitan diminish was aided by network changes across the city as a result of privatisation and the Tyne & Wear Metro system integration continuing to thrive. New Leyland Atlantean and Fleetline further quashed Metropolitan use. There were however examples that did cling on long enough to receive Busways fleet livery, those being 458 and 499 from the final batch.

It was leading up to deregulation that 769 was withdrawn from the fleet and placed into storage, together with other OCU-R sisters in January 1986 -  only a few years after removal of the centre doors. With Busways on the scene six months later, 769 was sent for disposal at PVS Barnsley in the August. Saved from scrap, the Scania made its way to Gretton Coaches of Peterborough in September 1986 who acquired a number of Metropolitans from the likes of Hull Corporation, West Yorkshire and Leicester. At the turn of the millennium, 769 was sold to Eric Graveling Bourne Coach Sales.

Many enthusiasts will be all too familiar curse of Metropolitan corrosion, with these buses living very short service lives due to rotting of the all-steel body frame, meaning not many made it through to preservation. 769 is no exception, but has done well clinging onto stage carriage service life for 14 years, before being officially withdrawn from public use in 2001. At this stage 769 isn't the looker, as it has undergone extensive bodywork removal with work having being commenced on refurbishing its steel structure with significant work already having been done on the rear under its previous owners, work can now be resumed on her at THV.