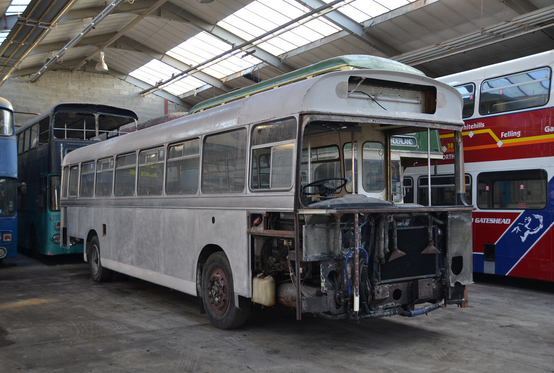 1812 (OWC720M) was new to Colchester Corporation Transport in 1973 as fleet number 20 and was one of fifteen Bristol REs purchased by the company between 1972 and 1973. In the late eighties, seven of the batch were sold and bought by Busways Travel Services which included OWC720M, this was numbered 1812 in the Busways fleet. 1812 entered service at South Shields in the company's yellow and blue livery, operating throughout South Tyneside.

In 1989, Busways acquired Tyne & Wear Omnibus Company, which was originally an independent company purchased by Go-Ahead who then immediately sold it to Busways. This resulted in a number of buses, including 1812, adopting the Omnibus livery in South Shields. This identity was short-lived due to the withdrawal of most of these vehicles, with services eventually migrating into Busways and Blue Bus brands. 1812 lived on where it was painted into the South Shields Busways livery and transferred to Blue Bus Services until 1997 when it was withdrawn.

Pending scrap in May 1998, 1812 was sold to North East Bus Breakers of Annfield Plain but was saved for preservation. After a handful of owners over the years keeping it in storage, 1812 now has a secured future in preservation as a Tyneside Heritage Vehicle group-owned vehicle.