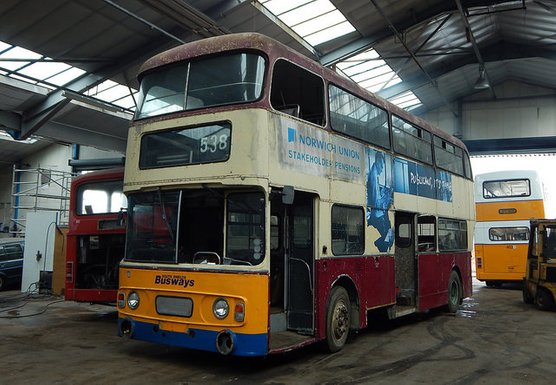 538 (MVK538R) was part of batch of 71 duel-doored MVK-R registered Leyland Atlanteans new to Tyne & Wear PTE’s Byker depot in 1976. In comparison to its sisters, 538 left the fleet rather early in 1983 as it was sold to Colchester Borough Transport. After use with Colchester it was sold on to Boons of Boreham in the late 1990s, then to Dons of Dunmow (Essex) for storage and as a source of spare parts.

Despite sitting outside for ten years and being donated in 2010, the chassis is perfect with no corrosion and interior is very original. It is the sole survivor of this batch of Atlanteans and unique for having a nearside staircase "the Newcastle Staicase" and centre doors.