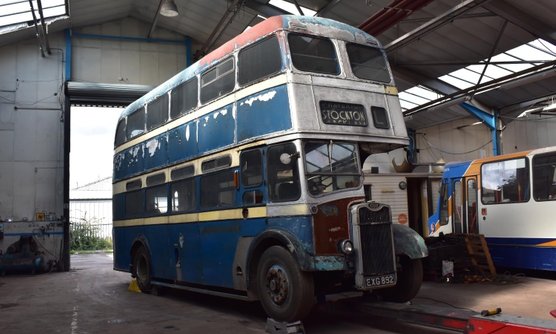 Northern Counties bodied Guy Arab IV EXG892 was was new to Middlesbrough Corporation as their 92 in December 1955. It was the final vehicle in a batch of eight examples numbered 85-92, which ultimately formed part of an eighty-one strong fleet of Guy Arabs purchased by Middlesbrough in the 1940s and 1950s with various bodies, including; Northern Counties, Roe and ECW.

EXG892 was withdrawn from service in 1971 becoming the last highbridge Guy Arab to work on public service in Middlesbrough. It was purchased from the Teesside Municipal Transport in the summer of 1971 for preservation and subsequently repainted it into original Middlesbrough blue livery the following year. Over the years, the bus has passed though the ownership of other hobbyists including those from Bolton and Cambridge. For the past twenty-or-so years it has sat undercover in Spalding near Peterborough.

The bus was originally planned to arrive back in the North East in March, but due to the Covid pandemic things were put on hold. Having been restored to its new condition back in 1971, the vehicle requires a further restoration project by its new owner in order to secure its long-term future as preserved bus.