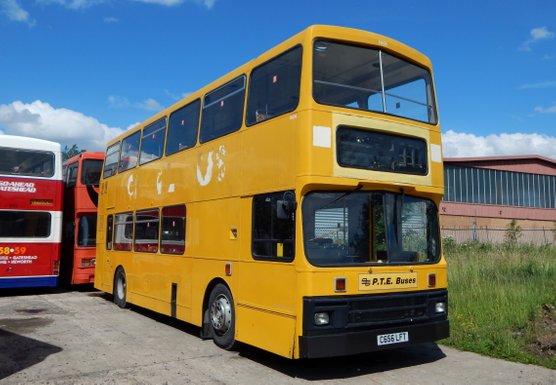 656 (C656LFT) was one of sixty-five Leyland Olympians with Alexander bodies delivered new to Tyne & Wear PTE in early 1986. It was ordered and delivered during the deregulation of the bus companies, and arrived in the PTE livery.

With deregulation a year previously, the TWPTE name transferred to a new legal entity of Busways Travel Services, resulting in a number of Busways identities being formed. Being at Sunderland depot, 656 lost its Tyne & Wear PTE logos in favour of the Sunderland Busways name. It was repainted into the yellow and green Sunderland Busways livery, and would later gain Stagecoach stripes.

In 2002 it transferred to Glasgow with a number of its C-LFT sisters, painted blue, and became part of the relaunched Stagecoach Glasgow Magic Bus network until 2005 when the brand was withdrawn from the city. Now numbered 14656, it made its way to Ardrossan where it initially operated in its Magic Bus livery, but was soon painted into Stagecoach swoops. A few years later the decker made its way to Dumfries, mainly used on school work. Its school duties were reaffirmed when 656 was painted into the iconic yellow Schoolbus livery.

Stagecoach Western withdrew the decker from service in the summer of 2010 at the end of the school year. It secured its future in preservation and made its way back up to the north east a few weeks later.