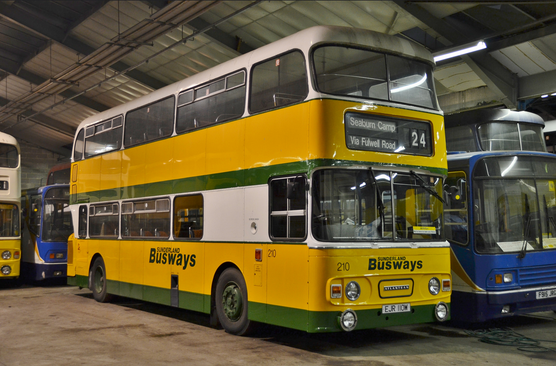 210 (EJR110W) was one of 30 AN68 Atlanteans new to Tyne & Wear PTE in 1980 with coach seating. 210 entered service straight away unlike sister 129 and was re-seated, also remaining with the PTE. It originally operated out of Sunderland and when new carried the fleet number 110. Passing to Busways after deregulation, 110 cascaded to Newcastle where it was allocated to Byker depot meaning it was repainted into the maroon and yellow City Busways livery.

Whilst at Newcastle, the vehicle was chosen to take part in a national advertising campaign for Independent Express Cargo, where it had a rather quirky all-over advert applied of a delivery truck running through the hours of darkness with the tagline "Delivery next day or you don't pay!". The advert was applied around the time of deregulation in 1986, with the truck’s image matching the bodywork and wheels, making it look particularly impressive from the offside view. During its time at Newcastle, a fleet numbering restructure meant that Atlantean 110 was temporarily re-allocated to 210 - with a new 110 on the scene thanks to a new batch of Leyland Lynx (F110HVK).

On its transfer to Cleveland Transit in December 1998, 210 was reverted back to 110 and was in service with Stockton until 2003. Fully preserved in the Sunderland Busways livery, it made its rally debut at Seaburn in 2006 and retains its identity as 210.