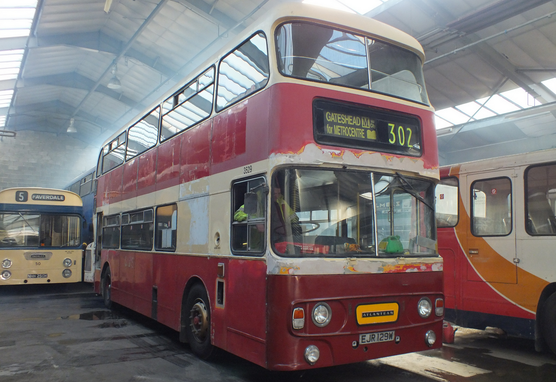 129 is a very rare coach seated Leyland Atlantean, and believed to be the last of its batch in existence to retain these seats. The PTE ordered 30 of these examples and were delivered new in 1980.

While the majority of the batch entered service with the PTE soon after delivery, the last ten (124-133) were placed in storage at Slatyford and sat unused for around a year before being transferred to Northern as their 3524-3533 in late 1981. It is believed that they were purchased for planned express network that never materialised. The ones retained by the PTE were re-seated after deregulation, which was done by its successor Busways in the late eighties.

So 129 became 3529 with Northern General and the company opted to keep the coach seating. After its service with Northern, 129 was sold onto G & S Travel of Ramsgate in Kent and withdrawn from use at the start of the millennium. Assumed to be scrapped like the rest of the batch, it remarkably was spotted at Wealden PSV Sales yard- which was where it had been sat for 10 years. 129 returned to the North East in 2011, an incredible find given its rarity.