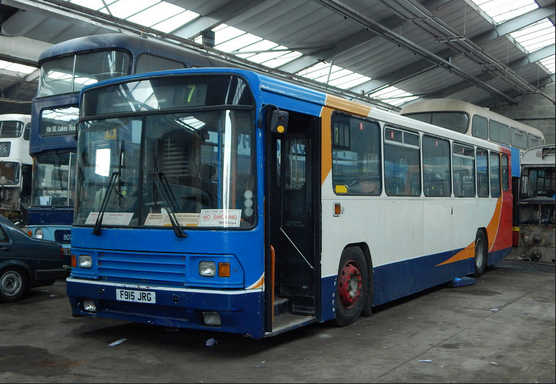 915 (F915JRG) was part of a fleet of 20 Scania N113CRB Alexander PSs which were new to Newcastle Busways' Slatyford depot in 1988. Busways were in fact the first UK customer for the standard-floor single-decker version of the N113.

These new single-deckers were compared to recently purchased Leyland Lynx, part of a company investment of 60 buses. At the time these buses were regarded as the first generation of Environmentally Friendly buses in the North East fleet, with quieter and cleaner engines. This trial resulted in further deliveries of Scania PS vehicles taking the total of this type to 36.

915 remained at Slatyford through the purchase of the company to Stagecoach, being renumbered as 28915. It had periods in both stripes and swoops liveries, and in 2004 had a short spell at Walkergate. Its North East stay came to an end shortly afterwards, with it transferring to Cumbria's Carlisle depot to help out during the city floods that hit the depot 2005. After a few months in Cumbria, 28915 went to Scotland in July 2005 and became part of the Bluebird fleet.

By 2007 it was withdrawn from the group with 918 and made its way to Stonehouse Coaches for use on schools before being purchased for preservation.