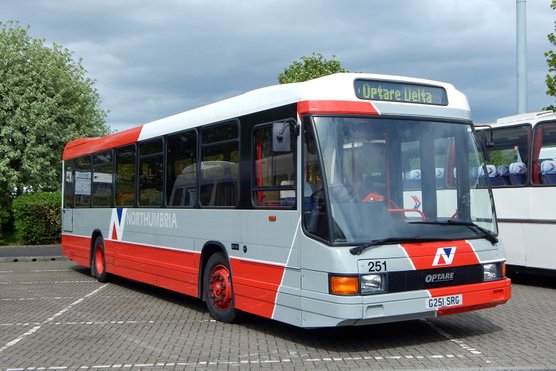 251 (G251SRG) was new to Northumbria Motor Services in November 1989, and was the first of a batch of four Optare Delta vehicles ordered by the company which were numbered 251 to 254. The batch was Northumbria's first full-sized single deckers purchased, and being the first, the company specified a number of additional features to enhance the vehicles which included; Hanover digital flip-dot displays, additional grab poles and high-back coach seating. The batch lost their flip-dot displays in favour of roller-blinds within a few years.

Northumbria Motor Services was the northern part of the United Automobile Services company, which was split into two prior to privatisation of the National Bus Company in 1987. In 1994, its management-owned holding company, Proudmutual, passed to British Bus. Cowie PLC then bought United Automobile Services and British Bus in 1996, then a year later was rebranded as Arriva PLC.

Prior to the Arriva takeover in 1997, the Cowie fleets generally still traded under their pre-privatisation names with individual liveries. But when Arriva came on the scene, 251 was the first single-decker to be repainted into a new group livery for Arriva which consisted of an aquamarine base with a cream coloured semicircle at the front, with a thin line yellow skirt. Operating under Arriva Northumbria, 251 saw service at a number of its division's depots and it soon adopted the new fleet number of 4090. It operated out of Jesmond from January 1996 to November 1998, Alnwick November 1998 to July 2001 and Morpeth from July 2001 to February 2002. It then transferred to sister North East division Arriva Durham County in March 2002 where it operated out of Durham depot until August 2005. The Delta transferred to Darlington in August 2005 until it was ousted to the reserve fleet at Peterlee a month later. 251 was withdrawn from public service on 11th January 2006.

It was immediately purchased for preservation by two former Directors and major shareholders in Northumbria Motor Services, one of whom has went on to become Non-Executive Chairman of Optare Group. For two years the Delta underwent an extensive refurbishment program at Gardiners of Spennymoor. It made its debut on the rally scene on 21st September 2008 at Showbus, Duxford.

Still privately owned, the vehicle is now in storage and part of the fleet at THV.