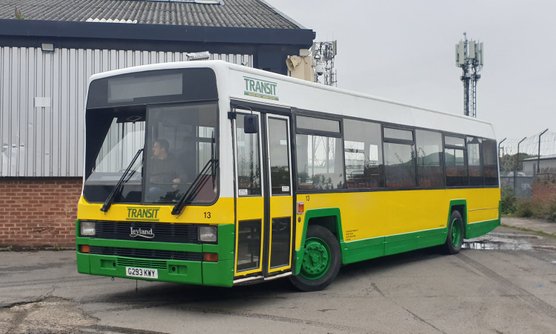 Leyland Lynx Mk1 G293KWY was new a Keighley & District as their 201 in November 1989, being one of eight purchased by the Blazefield company.

It later operated from sister subsidiary Sovereign Bus & Coach, then sold to independent Stotts of Minsbridge as a school vehicle. The Lynx was saved for preservation and was subsequently restored into Keighley & District condition. In 2017, the ownership of the bus passed to a North East individual, where work began to transform the vehicle into a pseudo Cleveland Transit bus. Cleveland Transit purchased 30 Lynx between 1989 and 1992.

Up until moving to THV, it was repainted into the base yellow and green colours of Cleveland Transit and ran in this condition for a couple of years.

Since moving to Tyneside Heritage Vehicles, the owner is now undertaking further restoration work on the vehicle, including taking advantage of a donor Leyland Lynx that they have purchased - former West Midlands Travel G309EOG. This donor vehicle, which is in an advanced state of corrosion and is best broken for spares, has so far donated its Cummins L10 engine plus other useful and now in short supply components. Further bodywork attention has also be given to G293KWY and it's Cleveland Transit look is nearing completion, with fictitious fleet number of "13" also been applied by its owner. Original roller destination screens are also to be sourced.