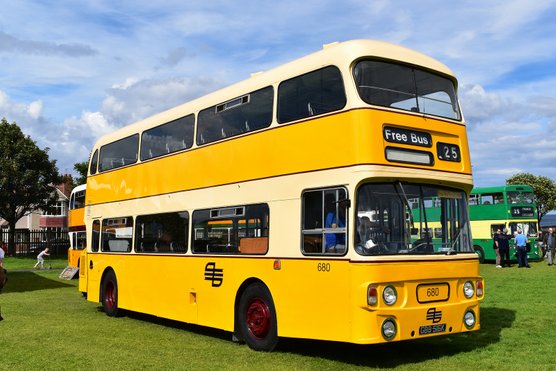 680 (GBB516K) was new to Tyneside PTE in 1972 where it worked out of Byker depot. It was one of a batch of 25 long wheelbase, nearside staircase PDR2 Atlanteans purchased by the PTE at the time, and after 1974 carried the fleet number 716. It survived life in North Tyneside until 1981, when 680 along with fifteen other examples were sold to the Isle of Man National Transport Company where it was numbered 65 and re-registered as N875MAN.

For four years these Atlanteans saw service with the Isle of Man National Transport Company, but due to their age they had a relatively short life on the Island before being replaced by newer AN68 Atlanteans. Some of the batch were subsequently sold for further use back in the UK mainland or scrapped on the Island, except 680. 680 successfully  stayed on the Isle of Man where it became a racing support vehicle, a role it was to have for the next 15 years.

When the time came for to replace 680 with a newer vehicle, it looked certain that it would go to scrap. However, she was saved by a couple of local enthusiasts who had taken a shine to her and bought it for storage until someone could be found to restore her to its former glory.  On Saturday 3rd May 2003, 680 made its way back to the North East for preservation into its original Tyne & Wear PTE livery.