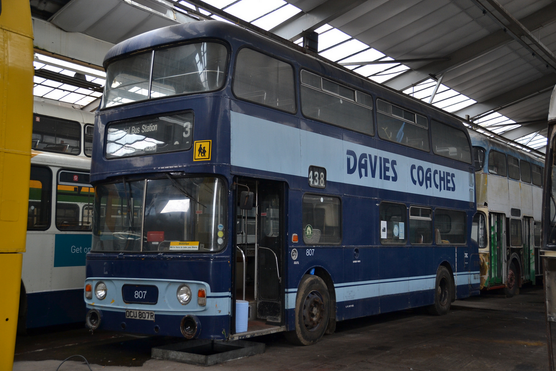 New in 1977 as part of a batch of 40, Leyland Fleetline 807 (OCU807R) was new to Tyne & Wear PTE and allocated to Sunderland. In 1979, 807 was painted into a commemorative livery for Sunderland Corporation Transport.

When new 807 had a second passenger exit which was immediately behind the staircase, but during the 1980s these doors were removed. After the deregulation of the bus companies the decker passed to Busways Travel Services and spent time operating in Darlington with some of the same batch, surviving through to the acquisition of the company by Stagecoach in 1994.

In the mid-1990s, 807 was released from Stagecoach and was sold onto Billy Davies of Plean (Stirling) together with sister 803 (OCU803R) and painted into the company’s blue livery. After time with Billy Davies it was secured for preservation in 2011.

Interestingly, this batch of Fleetlines were actually licenced and badged as Daimler Fleetlines when new, even though the Fleetline was now a Leyland model after the Leyland takeover of Fleetline production. They in fact carried Leyland chassis codes.