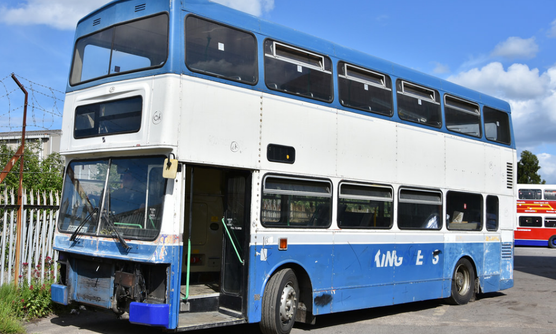 POG557Y was amongst the second batch of MCW Metrobus MKII's to be delivered to West Midlands PTE in November 1982. Entering service as bus number 2557 and starting out life at Selly Oak garage, this bus was built to the same specification (DR102/27) as the rest of the POG---Y batch for WMPTE, and the NOA---X batch that was delivered previously.

Upon the closure of the Selly Oak depot, 2557 was transferred along with sister vehicle 2556 to Birmingham Central Garage on the 2nd August 1986. After a 4 year spell at Birmingham Central, 2557 was again transferred with sister 2556. This time it was moved to Walsall garage, for a more permanent home until the vehicle was withdrawn. Many if not all MCW Metrobus MKII's suffered from catastrophic corrosion to the rear end and chassis. As a result, the buses started to become structurally unsafe after 10 years of service. Luckily, West Midlands Travel struck a deal with Marshall's of Cambridge to overhaul and rebuild the entire fleet of MK2 Metrobuses, saving them from an early grave. There was no record of when 2557 was rebuilt but research suggests it was between the years 1994-1996.

2557 was withdrawn in May 2001, and along with sister vehicle 2556, was sold to Kingsley's of Washington, Tyne & Wear. Now numbered 223, POG557Y served 11 years with Kingsley's sporting three different fleet liveries along the way. After being joined at the hip for 29 years, sister vehicle POG556Y was subsequently sold for scrap in 2011 and POG557Y remained until July 2012 where a deal was struck between Kingsley's and 15 year old Robson Field, for the vehicle to be sold for preservation, saving it from scrap. Now Robson is 18, things are starting to progress further with 2557. After a three year spell at Esh Winning in tight, undercover storage, POG557Y made its move to Tyneside Heritage Vehicles on the 23rd June 2015.