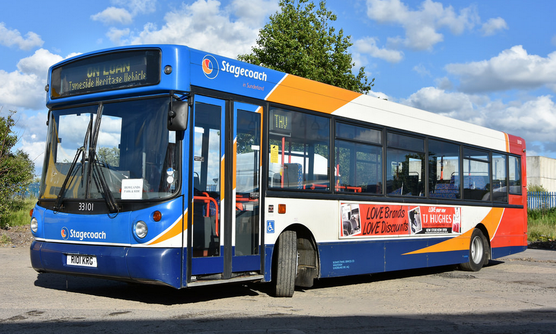 1101 (R101KRG) was numerically the first of twenty-six ALX200 bodied Darts to be bought by Busways in 1997 making it the first low floor vehicle to be bought by the company and carried 'Lo-Liner' branding. The Darts were allocated to Sunderland, and being bought after deregulation, 1101 carried the Stagecoach stripes livery.

It made its way around the North East region during its service days, seeing use with Byker briefly between January 1998 and June 1998, before moving back to Sunderland. By 2001 it transferred to South Shields where it was branded and allocated onto the 18s where it worked alongside other step-entranced vehicles- allowing one journey an hour to be low floor. This was until further Dart cascades from Oxford which allowed the service to go fully low-floor.

1101 retuned to Byker in June 2003, void of its branding only retaining 'Lo-Liner' although by the August 2003 it moved to Transit at Teesside. Now numbered 33101 and repainted into Stagecoach swoops, the vehicle remained operating at Stockton depot until September 2009 where it was ousted by newer vehicles in the form of MAN Enviro 300s. 33101 returned to service at South Shields and operated on most services alongside other ALX200 Dart examples.

In September 2012, it returned to its home depot of Sunderland where it seen use on its city network. In October 2013 it was ousted again by newer vehicles, this time by Dennis Enviro 200s, resulting it it making its way back to South Shields. May 2014 saw it move back to Teesside, but to Hartlepool this time where it was used as a spare vehicle.