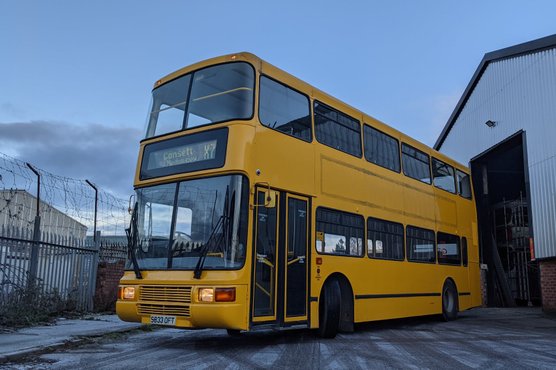 Northern Counties Palatine 2 bodied Volvo Olympian 3833 was new to Go-Ahead Northern General (Coastline) in Decemember 1998. It was one of sixteen examples ordered by the company for its Coastline subsidary to displace a number of Leyland Atlanteans. Coastline ran services in North Tyneside.

3833 was new in Go Coastline livery at Percy Main depot and was one of the designated DFDS Seaways ferry shuttle buses which were later fitted with luggage racks. The shuttle service, which still runs today as service 327, runs from Newcastle Central Train Station to the DFDS Ferry Terminal in North Shields. 3833 and its DFDS ferry shuttling sisters later recieved a special DFDS Seaways livery for the route.

In 2000/1, the DFDS service recieved newer low-floor vehicles but the Olympians still played a part on the 327. In 2005 repaint and repurposing of 3833 to miscellaneous and school contracts saw it receive the 'Yellow Bus' school livery. Luggage racks were removed from it and it saw use on Percy Main stagecarriage services.

In 2009 it moved from Percy Main, from where it had been stationed for most of its life, to Gateshead's Sunerland Road depot for schools and general gap-filling when normal service vehicles were absent - and was a regular performer on the X9/X10 corridoor between Newcastle and Middlesbrough.

When the former Metrobus Northern Counties Olympians arrived in 2010, 3833 moved to Gateshead's Saltmeadows depot alongside three of its sisters - several members of the school and contractural fleet was based at Saltmeadows for some time, but these vehicles still saw use on Gateshead services.

2012 saw 3833 recieve the red 'Northern' repaint but a year later was repainted back into 'Yellow Bus' livery', then a year later transfered to down Stanley depot.

After a year on school services around Consett and Stanley, the vehicle was withdrawn from service in November 2014 and later purchased for preservation by The County Durham Bus Preservation Group who plan to restore it back to its former Go Coastline glory.